News from the Artursson group

With a new and more accurate computational model for how the drug rosuvastatin (Crestor ®) is taken up and eliminated in the liver, researchers at Uppsala University paves the way for more efficient drug development and future treatment methods.

(Copied from News from the Faculty of Pharmacy)

Pharmaceutical researchers at Uppsala University have developed a computational model which, based on the amount of protein transporters in the human body, predicts blood levels during treatment with rosuvastatin. The results thus indicate that dose adjustment of the cholesterol-reducing drug does not require consideration of the patient's possible overweight.

“Our computational model predicted relatively accurate blood levels of rosuvastatin in eighty percent of the cases studied. We also found that individual variations in the amount of protein transporters are of secondary importance and that an average value provides sufficient information for correct prediction,” says Christine Wegler, researcher at the university's Faculty of Pharmacy.

In the study, 54 patients received a dose of rosuvastatin the day before undergoing abdominal or liver surgery at Vestfold Hospital in Norway. During the operation, samples were taken in which the number of protein transporters that transport the drug into the liver could be measured. Adding experimental data on rosuvastatin transport, the research team designed the novel computational model, which predicted the time for the drug to be taken up and eliminated in each patient with high accuracy.

“To create computational models are often time-consuming and often require the use of more or less random scaling factors to get correct predictions. Our results show that the amount of protein transporters can be used as a physiological scaling factor for the prediction of rosuvastatin. Now we hope that this new knowledge will benefit healthcare, and above all contribute to facilitating and streamlining the development of novel drugs and personalised medicine,” says Christine Wegler.

The study was carried out within the Cocktail project, a scientific collaboration between Uppsala University, AstraZeneca, the University of Oslo and Vestfold Hospital Trust. In order to investigate whether dose adjustments are generally necessary in drug treatment of overweight people, a number of substances are currently tested on how they are being handled by protein transporters and metabolic enzymes of the human body.

“The computational model we are now introducing is easy to adapt based on given data, thus making it applicable to both other protein transporters and drugs. The many prescriptions of rosuvastatin, being one of the world's most used drugs, contribute to our results’ great clinical relevance, but only when the Cocktail project reaches its goal, the full scientific significance of our work will become clear.”

The article is published in Clinical Pharmacology & Therapeutics. 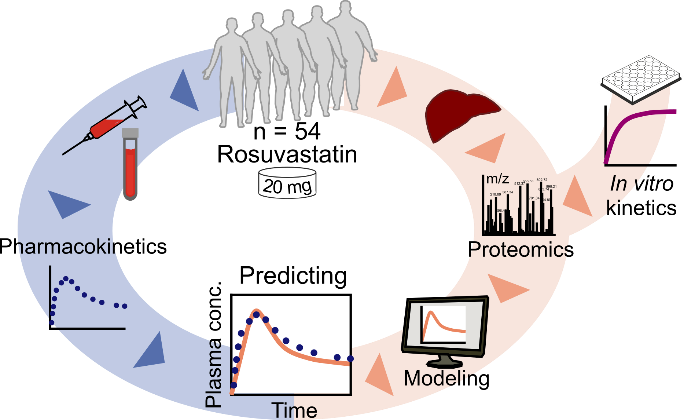